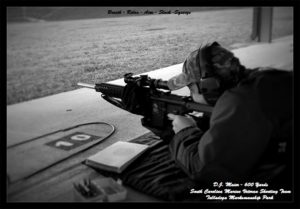 26MAR18:  This weekend I had the opportunity to travel over to the CMP Talladega Marksmanship Park to shoot in the 1000 point aggregate and Excellence in Competition (EIC) matches.  If you have never been to the this range I highly encourage you to make the pilgrimage.  The range utilizes the Kongsberg Target Systems (KTS), which allows you to fire your round and observe the impact on the monitor that is sitting right next to your shooting position.  No need to travel down range to pull targets for your buddies, which saves a lot of time, and ensures a quicker match.

Being out of the Marines for almost two decades I really appreciated being around individuals who genuinely loved the shooting sports and the camaraderie was evident.  Just something about the smell of gunpowder in the air that gives you some motivation for the day.  I would venture to say that those in the shooting sports world are some of the nicest athletes you will find around.  For example, we had a shooter who had a rifle go down during one of his relays.  The young Army Captain who happened to be shooting next to him, and finished with his rounds jumped up and immediately came to the rescue.  As the shooting clock ticked down, he assisted with breaking down the rifle, removing the bolt, inspecting it for damage, and when he found the cause immediately went to his rifle, 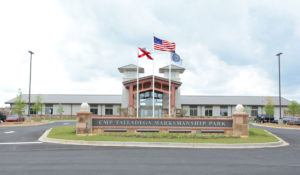 removed the bolt carrier group and passed it to the shooter who needed it.  As I watched this go down, the clock is ticking away, and I’m trying to calculate how much time he will have for each shot once the rifle is fixed.   Once the rifle is put back into battery, and without even skipping a beat the shooter was able to get his last eleven shots off with five seconds to spare.  I’ll say this – with all of that stress, he was able to compose himself and landed all 10’s and 9’s on the remaining shots.  Bravo Zulu! 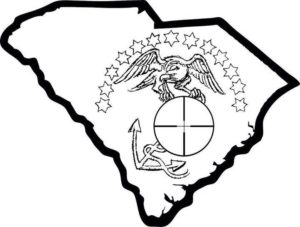 I’m fortunate to have been able to find a great shooting team composed of Marines who were and are on active duty.  The South Carolina Marine Veteran Shooting Team is always looking for individuals to join the team and travel to various matches around the SouthEast.  If you are looking to get back into shooting, check out the page and then try to make one of the planned shoots.

As far as my results for the EIC match they were not exactly what I wanted them to be.  Had a couple shots in standing that were off.  Too be honest my position felt shaky and I know I am going to have to practice this in depth.  I suspect a dedicated routine of dry firing will help shrink my shakiness.  I also noticed that my sitting position was not as tight as it used to be.  I suspect it has something to do with me having to re-establish and get my body to stretch and flex into position a lot easier.  Maybe this is a good time to start getting back into shape.  Trust me – I felt beat up when I woke up on Monday morning.  I’m also using a sling that I am not all that comfortable with yet.  Might keep it for a few more matches or I might just go back to a cotton web sling.

I did have one big hiccup at the 300 prone rapid fire.  Totally put the 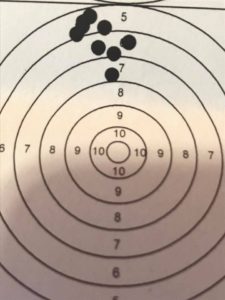 wrong elevation on my rifle.  As I get into position and fire off my ten rounds in 60 seconds, I felt really good about the shot placements, how the rifle recoiled back into my shoulder and set right back down on target.  In my mind I felt like I had a group of 10’s and X’s.  Then I look up……Nice little group at the top of the target.  Probably lost fifty points or so.  I didn’t let this get me mad – I chalked it up to a lesson.  Check out the image to the right… No sense in getting mad and ruining the rest of the match.  Lesson learned and I bet it won’t happen again.

Taught me to always check my elevation and windage readings and ensure the proper settings are on my rifle.

The next course of fire consisted of twenty shots at 600  yards.  I was extremely happy with the results.  Plugged mostly all 10’s and 9’s.

Based off of the grouping I would be best served to do a slight left adjustment on windage. 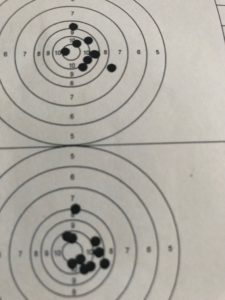 Long story short:  I’ve got a long way to go to be competitive, but I think if I put in the sweat equity I’ll be competitive by the end of this year’s shooting season.  Hope to travel up to Camp Perry to compete in the national matches.